A retired cardiologist sits at a table at Toronto’s L’Chaim Retirement Home, sorting through cardiograms. He’s not volunteering his time helping others, however. Unbeknownst to him, he’s working at keeping what memories he has.

L’Chaim is using the Montessori Method for Dementia program, a novel approach to combat dementia that has been rolling out in day centres and nursing homes across the country over the last few years. Taking the principles of the Montessori method created for children in the early 20th century and applying them to adults suffering from a range of cognitive diseases, the program is seen as a ray of hope in what is often a heartbreaking reality. More than half a million Canadians are currently affected by dementia, and with an aging population, it is poised to become an even greater concern.

The program’s relatively simple approach is part of its appeal. As in the case of the doctor, the Montessori Method gets people to do tasks that feel familiar, along with brain-boosting games, discussion groups and a physical environment that’s designed to both reassure and stimulate. And it seems to help.

At the Dementia Support Dov & Zipora Burstein Senior Centre, the first day centre of its kind in the Greater Toronto Area, Miriam Greenberg is working at rolling out cookie dough. It’s obvious she’s done this many times before. Her manicured hands move the rolling pin very slowly to smooth out each segment to its edge, pressing any cracks that have formed back together.

In other settings, this petite 87-year-old and the three other women at the table would likely have been seen primarily as dementia patients who need constant care. Here, at the new seniors’ day centre Greenberg attends three times a week, she’s seen as a woman who might have enjoyed baking earlier in her life and who might enjoy it today, too. “I used to bake a lot,” she says as she sprinkles a nut mixture over the dough. “Grandma’s cookies,” she adds, her voice trailing off as she quietly lists the first few ingredients.

The Montessori Method for Dementia is the brain child of Gail Elliot, a retired McMaster University gerontologist who now runs a business training caregivers and consulting with public and private institutions. She was inspired by the work of an American psychologist, Cameron Camp, who in the late 1990s seized upon the idea that by finding the person behind the dementia, caregivers can find clues about how to strengthen their brain function – or at least slow the decline. “Find the story and see the person: Who is that person today and how can we bring that person out?” says Elliot. “Memories aren’t all gone. Let’s find out what still exists and capitalize on it and enhance the quality of life.”

While Elliot resists seeing too many parallels between young children and people with dementia so as not to infantilize anyone, she does think the Montessori brand may help the idea click for many.

“It’s so basic,” she says. “When you’re doing something with your child, you’re thinking what are the needs of this child? What does he like to do, what is he able to do? You don’t challenge him to do too much because he’ll be frustrated and gives up. But you make it a little harder than what he can do so he can improve.”

Others who work in the field see Montessori-based methods as having good potential for providing stimulation and engagement.

Habib Chaudhury, a professor and graduate program chair in the department of gerontology at Simon Fraser University, says more research is needed but there is “some evidence that the method reduces anxiety and provides meaningful activity for people with dementia.”

He says another factor he sees as beneficial is that the method relies heavily on the sensory environment, and the five senses, which is “very important in dementia experience.”

At the centre, it’s hard not to notice another major Montessori principle in play, that of the “prepared environment.” Large, legible signs fill the walls. There’s a huge calendar, reminding people what day it is. At the self-serve coffee and tea table everything down to the sugar bowl is labelled. While the exits are cleverly camouflaged by tromp l’oeil paintings of furniture – to avoid the common behaviour of many dementia patients to “exit-seek” – everything else is well labelled, including the bathrooms and the kitchen cupboards.

“Nothing is left to their memory to guess,” says Deborah Rothenberg, the director of operations, as we tour the centre. “It’s a safe place.”

Tables are prepped with adult versions of daycare activities like sorting, puzzles and games. Song books and stories are printed only on the right-hand page, with a “Please turn the page” note on every lower right-hand corner. Where children might play with cute animal images, the activities here play to the crowd. There’s a basket of towels to fold and one holding socks to match. If there were men here today, they might be pointed in the direction of a bin filled with Home Depot tubing and plumbing connects – adult Lego if you will.

“Nothing is babyish,” she says. Except, that is, for one of the small rooms flanking the centre’s large open space filled with baby dolls and clothes. Rothenberg is careful to point out that this room is therapeutic for very low-functioning dementia clients, who can find cuddling dolls and dressing them comforting – the seven women here today are considered high-functioning and would be insulted to be asked to play with dolls.
In addition to helping seniors spend a meaningful, enjoyable day, Elliot says the program can also curb many of the behaviours associated with dementia, such as patients grabbing at staff, repeatedly asking the same questions, wandering and screaming, which can be common in facilities without more resources.

“I’d like to transform the way we care for people with dementia.”

Greenberg’s daughter, Fern Kutnowski, says the difference in her mother, in the past four months she’s been attending the $59-a-day program, has been astounding. She had been on a decline health-wise and spent most of her time sitting in a chair looking out the window. Now, she’s more likely to engage in conversation with her daughter and doesn’t need to be nagged to get active. Although she was resistant to go at first, “She feels good at the end of the day. She’ll come home and say ‘I worked very hard today.’”

And, yes, baking may have played a role. “My mother was an amazing baker. We all used to ask for ‘Safta’s (grandmother’s) cookies.”

Greenberg, who has suffered from dementia for more than seven years, lived in an apartment with home-care help, but now lives in a seniors’ home. Kutnowski says she is functioning well and is engaged in life.

“If she was healthy, she might think this was nonsense. But it’s working. She’s not the same person.”

Dementia is the gradual loss of cognitive function – or the ability to process thought. It occurs when connections in the brain are severed or damaged, and brain cells die. There are many forms of dementia, but the most common is Alzheimer’s disease, where the build-up of plaque and tangles damages the brain and causes memory loss.Alzheimer’s and many other forms of dementia damage the cerebral cortex – the outer layer of the brain – which is vital for language and memory. A commonly held theory – dubbed First In/Last Out – holds that abilities acquired first in childhood remain the longest. This “procedural memory” includes basic motor skills and habits. Conversely, things learned later in life, like vocabulary, facts and events – or “declarative memory” are the first to be forgotten. The underlying philosophy of the Montessori method is to focus on a person’s individual strengths rather than their weaknesses, and to provide a supportive environment. So people are given activities that tap into remaining skills – like baking. 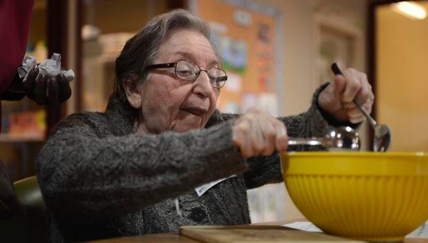